Dude, it's a race recap!


First and foremost, I hope everyone had a super duper Happy Mother's Day. If you're not a mom, I hope you had a great day celebrating the moms in your life. I had a great weekend. Let's rewind a few days, shall we?

Friday I picked up our race packets. I was a little bit disappointed at the fact that I only got a t-shirt and race bibs *more on that later*, but was really impressed at how organized everything was. Sped home, dropped the kiddos off with my Mom and headed out to a dinner function that we were invited to. Longest.Dinner.Ever. Not that it was bad, just long. Home at around ten (gah!) where I promptly shoved the kids into their beds and got our clothes ready for a quick and easy morning departure. Cue midnight, and I'm finally ready for bed. Why do I always do that?

Getting out the door Saturday morning was easy!! The kids outfits were on them and they were ready to go in mere minutes, as was I. Coordinating with all the people that were participating with us was harder than I expected. My in-laws were travelling about 45 minutes to get there. They had my sister-in-law who was going to be walking the 5k with the kids and my brother-in-law and his fiance. We also were meeting up with the runner friends of ours, T & J. We parked right next to T & J, but they had to pick up their bibs still so they were long gone before we got there. The in-laws were there, somewhere in the mass of people, and my brother-in-law (we'll call him TB) was still en route. As we walked along to the start line, we heard the announcer talking about the 5k runners starting at 7:45 instead of 7:30. WHAT? My husband gave me that look. Oops. All this time I was saying that the runners started at 7:50. That was the walkers time. I am so glad we arrived early and that there was a fifteen minute delay!!! We found my in-laws, T & J popped up a few minutes later, and TB & fiance were nowhere to be found. {They wound up finding the kids and s-i-l in time for the walk.} Mere moments later, they started counting down the runners. I kissed the kids and off we went!

I am surprised at how many people don't understand that there is a reason they put the yellow caution tape across the sides of the starting line. Do they think everyone bottlenecks at the starting line because they like feeling like cattle? Even my in-laws thought they were being sneaky by going off to the side but we called them back and told them that their chip wouldn't trigger unless they actually crossed the line. Dorks. Anyway, after bobbing and weaving through the beginning we finally fell into a good groove. I was running with J, who is so much fun! We were chit-chatting about all kinds of stuff. The boys were hanging out behind us. I'm sure for all kinds of reasons, one being that my husband hadn't run more than a half mile since October. I completely missed the mile marker but I felt great! I could tell that I was pushing myself hard to keep up with J, who I knew was holding back for me. Around probably the mile and a half mark I started lagging behind. I could see J just barely ahead of me, she kept looking back to see how close I was and then I saw her slow up big time. She wouldn't let me fall behind, she said. We passed the 2 mile marker which I missed again! Around a half mile later I started feeling really really really hot. My face felt super flushed and my stomach felt a teensy bit queasy. So I slowed up again. I pushed my visor up higher on my forehead so I could get some more cool air. I watched them get further and further away from me until I couldn't see them anymore. And then all of a sudden she was back!!

"You didn't have to come back for me" I said.

"I'm not trying to beat any records today", she said "And besides, it's easier to cross the finish line if you've got someone to do it with."

Love that girl. She pushed me the last quarter mile and told me that I needed to sprint and give it all I had when we passed that three mile marker. And so I did. It wasn't much, but it was everything. The announcer was calling out, "twenty more seconds if you want to finish under 34 minutes". I knew that with the delay in chip time, maybe, just maybe, if I finished under 34 minute clock time I would actually beat my goal of 33 minutes. Sputtering past the finish line, it read 33:53. Fingers crossed, I hoped my chip time would prove me victorious.

Race expo was awesome! Lots and lots of free goodies. I mean lots. Food, GoGirl, swag bags, coffee, keychains, magnets, chap stick, pink pompoms...you name it. Totally made up for what I thought was lacking at race packet pick up. =-P 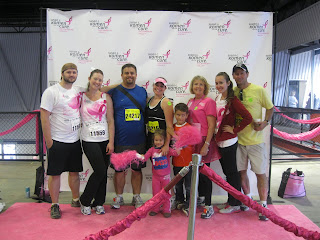