Our race preparation really began on Saturday. Jacob had to work, so I made sure I packed him a nice, carb-y lunch with a good mix of carbs and protein. I ran around with the kids most of the day and we enjoyed a lunch with a little extra brown rice on the side for me (I mix in chopped olives and raisins, yum!). I visited the race expo, which was a little disappointing to me since I hear these are really great places to meet vendors and get gear. There were not a whole lot of booths here. I did get to stop at the Fleet Feet booth and scored two 13.1 stickers and a visor for 50% off. Score! When we got home I started preparing my very first homemade spaghetti sauce. Thank you Runners World for including several tasty pasta recipes in their current issue!! I made a delicious pomodoro base and prepared Fettucine Capricciosa. YUM. I used garden vegetable fettucine to add a little extra oomph in the veggie department. I had to time all of this just right, since we had a surprise engagement party to head to that evening. We had to leave the house at 5:45 to be there in time, so we ate a super duper early dinner. I was worried about throwing off our regular schedule but the party was for my brother-in-law, so we figured it was worth the risk.
Up at 5:30 am. I had everything prepared the night before to get us out the door in a timely manner. Unfortunately, my husband somehow still took FOREVER to get ready. We headed out the door at 7 am. The race started at 7:45. Luckily it's just a few miles down the road, but we had no idea what to expect with traffic and parking, etc. Parking was available the local community college, which happens to be located across the street from the starting line. Very convenient, and it was a nice way to get warmed up a little bit. They offered shuttles to the starting line every ten minutes though, just in case. We walked on site and immediately found our friend Monica, who owns the Grocery Outlet in Rancho Cordova. We stopped and chatted with her for a moment while we pinned on our bibs and got our timing tags situated on our shoes. I had to go pee- BAD so we said our goodbyes and headed to the porta potties, where I stood in line with probably about 100 people. As I stood in line, the race started. I wasn't too worried since there were a TON of people there and we usually start more in the back of the pack anyway. Once I finally got out of there though, only the stragglers strolling on through were left so off we went. As we came across the line, the announcer says, "gotta love the runners jumping in late, running in from the bathrooms!!" I gave a little wave and smile and we were officially off! We saw Monica standing by the sidelines cheering us on and she snapped our picture. 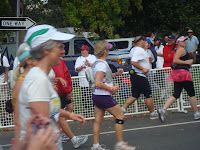 There I am in the pink skirt with Jacob behind me!

We felt pretty good, we took in our Gu Chomps in the first mile to give us some extra energy since it had already been almost 2 hours since we had breakfast. The first few miles felt great and I was totally ready to go go go the whole time! At around three miles, we found ourselves next to a woman who was power walking about as fast as we were jogging. So Jacob asked her about her pace and fell into a conversation with her. It sounded like her finishing goal was right around ours, so he asked if it was okay if we hung out with her for a while. Her name was Linda, and chatting with her sure made the time and miles go by much quicker than I expected. Before I knew it, we were at the halfway mark. Around mile eight I felt what I was positive was a blister developing on my right foot. Lame. At around this point is also where we fell completely silent. Shortly after this, I looked at my husband and realized that he was sweating so much that his visor was dripping! He had his own tropical rainforest going on in front of his face. As we ran along the river, we came across a head wind which I'm sure felt much stronger than it really was. As I was off to Jacob's left and slightly behind him, this head wind also blew his dripping hat sweat right onto me, so lucky me I got to share his little climate for a little bit. I was too tired to move out of the way though.

Mile 9 and I felt a slight cramping going on in my upper calves. A new kind of discomfort. Luckily, it passed fairly quickly. At this point, we were still alongside Linda and she was keeping up a great pace. She looked back at me a few times and told me that I was doing great. Jacob was extremely supportive as well which was good because it would wind up coming back to him in the last two miles.

Around mile 10 is where Jacob ran out of steam. I naturally slowed down with him since my legs felt like lead pipes. He fell behind me and I kept looking back at him to make sure he was still there. "Don't worry", he said "you won't lose me. I'll follow you anywhere." So on we went. Right about this point is where I started to feel HOT. It was warming up quickly and we were in direct sunlight. I kept telling him to just keep going. On the side of the road, they had placed signs with pictures of cancer patients and sayings like "Because of you, he can play sports." "Because of you, she can be the grandmother of triplets." It brought me to tears. At this point, I was very emotional because of the distance we were running, so seeing things like that just brought me over the edge. It was great motivation.

Miles 11 and 12 were just trudging along. We never broke our stride, just slowed down. We had lost Linda at some point between 10 and 11. We just kept motivating each other to keep putting one foot in front of the other. I would push him and he would push me. At the 12.5 mile mark, we could hear the announcer over the loudspeaker and we could see up ahead a finishing line marker, around a corner with some trees. Go, Jacob said. "Look, we're there! Just a little bit further, push it! Let's have our kids see us push it through the finish line!!" Turned out it was a dirty dirty trick. As we got closer, we realized that there were no spectators cheering us on because it wasn't a finish line at all! It simply said "1/2 mile left!! Get Moooooving!" It made us laugh, and pushed us through the last 1/2 mile.

Crossing the finish line, we were side by side and I grabbed his hand as we crossed over. Linda came running up to us, full of congratulations and excited to see that we hadn't gone over our goal time by too much. She finished just a few minutes ahead of us. We took a picture with just the two of us and then one with her too. If it wasn't for her, we probably wouldn't have kept going so strong as long as we did. And she said if it wasn't for us, she probably would've slowed down too! We will forever remember her as our first HM pacer.

It was exciting to see all the spectators in the neighborhoods that we ran through and elsewhere along the route. I loved that Fleet Feet had their employees out cheering us on. Some were even dressed in cow costumes with signs. There were also aid stations every 2 miles, manned by local school cross country teams. These kids were also sprinkled throughout the route, cheering everybody on. I'm telling you, that was a great touch. They made the difference. Our cheerleading team was sparse. Our friend Monica and her daughter were there, but they were working their booth and also helping at the finish line. My brother-in-law was supposed to pick up our kids from my sister and bring them to see us finish, but that didn't work out. (Totally another story for another time, good grief. Suffice it to say I'm totally disappointed and pissed off by it.) Maybe next time.

So our FIRST half marathon is in the bag!! Our finish time 2:48:53. Our pace 12:54. We are already talking about the next one. Maybe in March, maybe sooner? I'll keep y'all posted!! Until then, here's some pics for your viewing pleasure! 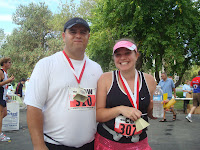 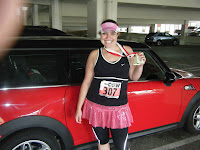 Me, with my finishing trophy- COWBELL! 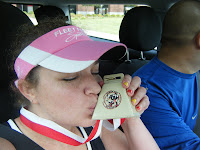