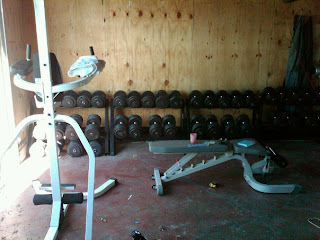 My husband and I have been working really hard on our garage, trying to get it situated for our home gym. He has always dreamed of having one, and after several months of buying pieces here and there, we have everything to start off. Here's where we left off two nights ago. We still want to get the rubber floor mats and maybe some mirrors to go along that blank wall, but we are pretty happy with it so far. (PS- Did you know that mirrors cost roughly $7/sq.ft?? Yikes!) About two hours before this picture was taken, that wall was completely covered with floor to ceiling shelving that was full. Yes, we had that much crap. Getting that taken down and moving everything around was a workout in itself.

I have been pretty irritated the past few days because it's been so hot and the only suitable running bottoms that I have are black pants that make my legs feel like they are on fire. I knew I had a pair at some point that went to just below the knee...if only I knew where they were. How does someone lose a pair of shorts? I used them a few months ago, and then they disappeared. I was mourning the loss of them, when I just happened to open my sock drawer last night for the first time in over two months (because all I've been wearing lately are sandals and slippers and my running socks get stored in my gym bag), and there they were! Shoved into the back of the drawer were my beloved running capris. I don't really know the technical term, they are shorter than capris, but whatever. Woohoo, I have two pairs of running bottoms now!

Yesterday was a pretty mild summer day for us so once the sun went down it cooled down very quickly. It was beautiful by 10:30 when we finally made it out the door. I wound up throwing on my long sleeved top, it was actually a little bit cold for a tank top. Off we went, down West Capitol. Now you would think that since Ironman is moving almost 300 lbs and hasn't run in over a month, that he would be slow and stiff. Not my man, he left me in the dust! I had a little bit of shin discomfort for the first mile but it smoothed out for me. Overall, a really nice run. I love running with Ironman because he really pushes me and keeps me going. If I had been by myself, I most certainly would have started walking. Three miles under our belts. Twelve weeks and three days to go until our half marathon debut!!!

Seen on my run:
Tonight, another three!!
Posted by DaphneB at 1:18 PM