Bella, the truck slayer (aka: my dog) 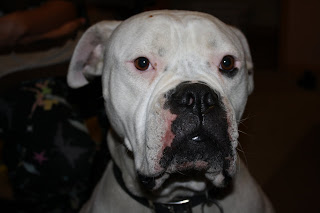 Yesterday was a good day. I feel like I got a lot of stuff accomplished that I wanted done. Jacob got off of work a little earlier than usual and he asked me if I wanted to take my run by myself since it had stopped raining. I jumped at the opportunity and he said that as long as I took Bella with me, I could run wherever I wanted.

Bella is our lovable, huggable, ginormous American Bulldog. She is roughly 100 lbs of pure muscle. Don't mess with her. Or me, when she's around.

So off we went. As I started running, she was on the inside of me, catching sniffs of the plants we were cruising past....until a diesel truck zoomed past us. This apparently was a threat, and Bella must squash it. So she charges it, broadsiding me, nearly taking me out at the knees. That right there almost ended the run. But I didn't want to waste my chance, so continued on. Every vehicle larger than a standard pickup truck caused an issue with her. She wanted to jump at all of them and in a few cases attempted to balls-out sprint after them. This is not conducive to maintaining a steady pace or stride. After one mile out, we headed back home.

Being that this weather is completely bizarre (it poured for a few hours before we went out), I didn't know how exactly I should dress for this little outing. Running pants, tanktop, and long sleeved running shirt were my final decision. I figured this would be a safe bet. By the time we made it home, I was sweating like a pig. Between the run and constant tugging on the leash, I got a whole body workout! I feel good today, and looking forward to the 2 miles again this afternoon. 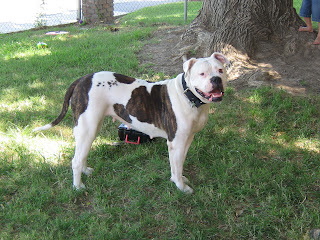